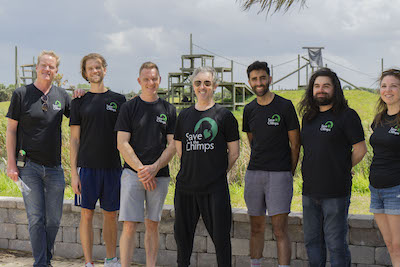 “I feel a personal connection to many of the residents here,” Alan said after touring the sanctuary. “In the 90’s I starred in a film with an infant chimp, named Tonka. Back then I didn’t know much about the way showbiz chimps are treated.”

PETA was granted permission to rescue Tonka last year, but when the group went to carry out the court’s order, Tonka had vanished—and his owner falsely claimed that he had died. In response, PETA launched a nationwide search for the chimpanzee’s whereabouts that included help from Alan, who even offered a $20,000 reward for anyone who found him.

Tonka was located in June, inside a basement cage. He arrived at the sanctuary and quickly settled in, enjoying soaking up the sunshine on the top level of his play yard, eating fresh food, and enjoying engaging enrichment. He immediately greeted his chimpanzee neighbors and plays chase with them along the yard.

We are honored to have Alan join our advisory Council and look forward to working together to advocate for chimpanzees in need.