50% of all profits benefits Save the Chimps.

We are not descended from apes. We are apes. 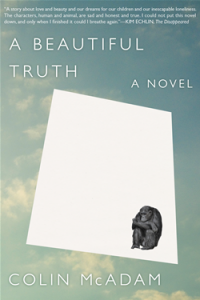 “If the book were simply the story of the Ribkes and Looee, A Beautiful Truth would still be a remarkable
achievement. But the narrative’s radical other half, which unfolds in loosely alternate chapters and
focuses on a group of chimpanzees in a Florida research institute, invoking their perspective, lends the
novel a rare depth… McAdam’s acknowledgements attest to serious secondary reading—Frans de Waal
and Sue Savage-Rumbaugh are both cited—but his depiction of simian life’s limitations turns research
into rhapsodic lamentation.”

A Beautiful Truth’s twinning plots focus on the lives of humans and chimpanzees, both independent of each other as well as when they coexist. In the first narrative we meet Judy and Walter Ribke, two affluent Vermonters that have adopted a chimpanzee as a surrogate son, affectionately naming him Looee. It is a sometimes sad and often charming story about an unlikely family trying their best despite the often confusing reality of their situation. And yet it is also fraught with undeniable tension, as the fragile nature of their adopted son’s domesticity is tested daily. Always present is the fear that Looee, particularly as he enters adolescence, might lose control of his urges.

In the second narrative we meet a troop of chimpanzees that are part of a language experiment at the fictive Girdish Institute in Florida. The description of the work at Girdish is fascinating and thoroughly researched, as McAdam brilliantly renders the interior lives of these remarkable chimps and the scientists studying them. The work at the institute has proven that chimps have memories, understand signification in language, and can solve complex problems with both logic and emotional intelligence. The group at Girdish is very much like us: political, altruistic, quick to anger, and often as quick to forgive.

A Beautiful Truth is a powerful and haunting meditation on ape-kind. The wide-ranging engagement of this novel encompasses nearly the entirety of the lives of captive chimps, from their brutal use in medical research to their stunning ability to communicate and learn human words, making McAdam’s novel as much about raising awareness about the plight of chimps used in medical research as it is about awakening humans to the reality that we too are apes. 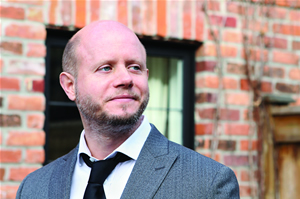 Colin McAdam’s novel “Some Great Thing” won the Amazon Books in Canada First Novel Award and was nominated for the Governor General’s Literary Award, the Rogers Writers’ Trust Award, the Commonwealth Writers’ Prize, and for the John Llewellyn Rhys Prize in the U.K. His second novel, Fall, was shortlisted for the Scotiabank Giller Prize and awarded the Paragraphe Hugh MacLennon Prize. To research A Beautiful Truth, McAdam studied and worked with the chimps a lot like the ones under the care of Save the Chimps. He has written for Harper’s and lives in Toronto.

Why We Partnered
A BEAUTIFUL TRUTH is a powerful, touching book about the lives of a few dozen chimpanzees in different circumstances. One of them is the ill-fated “adopted” child of a human family in Vermont. Other chimps are involved in a language research program at a fictive research facility. These portions explore the complexity of the chimpanzee mind and demonstrate just how remarkable our closest relative is. That very same facility has a darker, crueler side to it too, as it is funded by medical research programs that yet another group of chimps are subjected to.  The chimps that feature in McAdam’s novel, from the adopted Looee to the unfortunate victims of experiments, are experiencing some of the very same things that our chimps experienced before being rescued.

Soho Press has pledged to donate a portion of all proceeds of A BEAUTIFUL TRUTH (from any retailer in print and digital) to Save the Chimps. We receive even more money when you buy the book directly from us, in which case 50% of profits benefit our chimps.

A good book and a good cause… What’s not to love?